Office Spaces Throughout the Years: A Brief History of Office Design Trends and How They Started 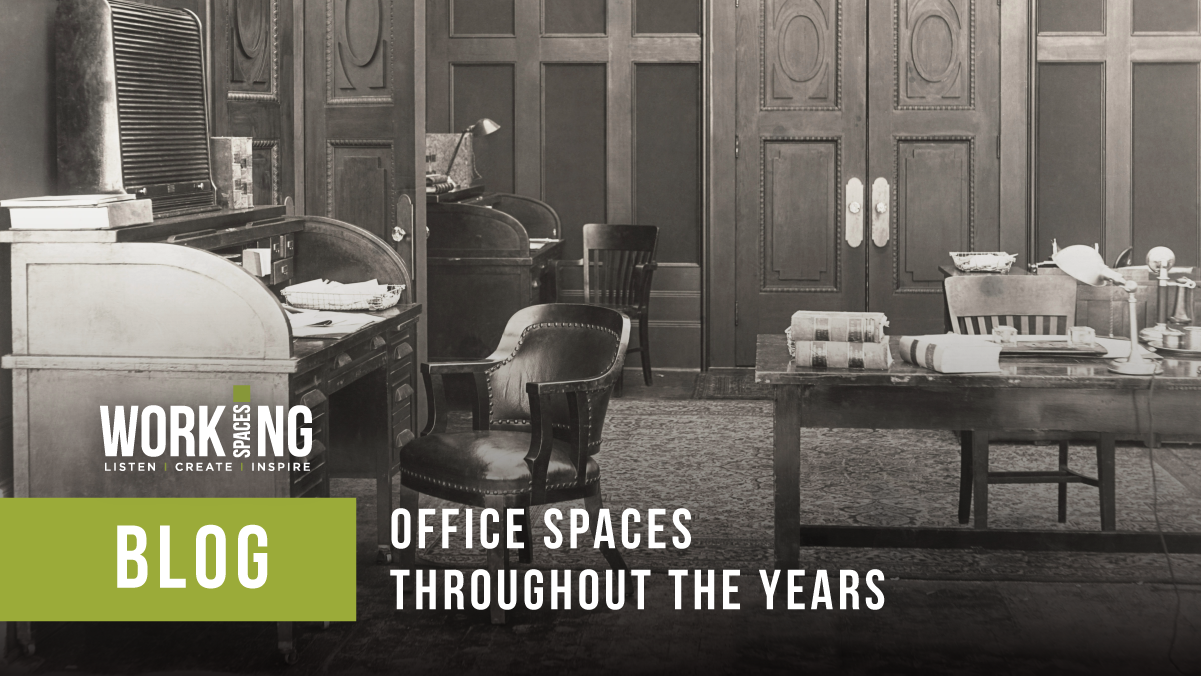 As is the case in most industries, the advancements of recent decades have left office design and the employee experience unrecognizable compared to just 50 years ago. The history of trends has varied over many centuries. While some ideas become outdated due to a better understanding of the human condition, others fall out of fashion because of innovation in materials, manufacturing, and technology. With an inspired eye to the future, Working Spaces offers a fascinating look into the past through the history of office design.

The Office Wasn’t Built in a Day

Although we can hardly imagine daily life thousands of years ago, advanced civilizations like the Roman Empire were vast with complex logistical operations. The anthropological study suggests that we have Ancient Romans to thank for the original offices; they created dedicated spaces where official work was conducted. The Roman Latin officium loosely translates to the bureau, as we use it today.

In the early 18th century, an expanding British Empire was engaged with increased trade worldwide, and the demand for official business space inspired the erection of the first dedicated office building in 1726. Known as The Old Admiralty Office, its meeting spaces and board rooms were first occupied by the Royal Navy but are still in use today. The office design strategies used here and in The East India House erected in London in 1729 were found in era government reports, suggesting “separate rooms for the intellectual work” and “the working in concert under proper superintendence” for the more mechanical jobs.

As economies around the world developed into the early 1900s, so did influential designs among early modern offices. Based on scientific concepts for maximizing industrial efficiency, rigid, regimented layouts resulted in endless rows of desks for easy oversight by managers. This concept closely followed the principles established by mechanical engineer Frank Taylor, whose “Taylorism” ideas failed to consider work’s human and social elements, resulting in dark, cold, and uninspired spaces.

The Sky’s the Limit

Around the same time, engineering advances lent to building large skyscrapers that could accommodate several companies. This radically new way of working established the need for office design as a discipline, launching the industry into a new era. By this point, the history of trends combined to form an amalgam of both private and open workstations, with some offices even housing kitchen staff. The Great Depression seemed to halt much of this progress in the late 20s, but by the late 30s, new concepts like warm spaces, bright lights and cork ceilings started to make their way into office designs by architectural greats like Frank Lloyd Wright.

After much global tumult in the 40s, the baby booms and space races that modernized the 1950s lent to advances in office design and management that continued well into the 60s. This era saw the adoption of groovy new Northern European concepts like Burolandschaft, German for “Office Landscaping,” which advocated less rigid approaches to office layouts and emphasized meeting the needs of employees. Desk groupings allowed for a more social experience that nurtured collaboration and organic elements like plants creating natural boundaries between areas. Burolandschaft evolved into concepts like the Action Office, which included a variety of alternative work settings for men and women new to the workforce, including meeting rooms and modular furniture collections that provided flexibility and privacy.

Open plan layouts aren’t for everyone. The three-sided divisions popular in the late 1960s would ultimately evolve into the staple of 1980s corporate America—Cubicle Farms. The availability of cheap, modular wall systems paired with the drive of new economic woes would again shift focus to maximizing profitability and resulted in one of the more depressive periods in office design since the discipline took shape. It took the advent of tech in the workspace to push the more human-centered focus we work with today.

As technology rapidly developed, it became clear that employees could be much more mobile and need more flexible working methods. As a result, office design started to embrace ideas like “hot desking,” which allowed staff to choose available spaces rather than specific stations and required the entire office design concept to be supportive and inspirational. Influential designs now allow advancing technologies to be seamlessly integrated into ergonomic furnishings. In addition, we now understand the benefit of drawing biophilic inspiration from home, with warm natural materials, organic elements like plants, and easy access to natural light and fresh air.

English Romantic poet William Wordsworth beautifully captured the benefit of hindsight in shaping things to come; “Let us learn from the past to profit by the present, and from the present, to live better in the future.” When partnering with the exceptional designers at Working Spaces, you can rely on the office design knowledge and experience they integrate to build the foundation for your company’s stellar future. We look forward to making history together, so contact us today with your ideas and questions!